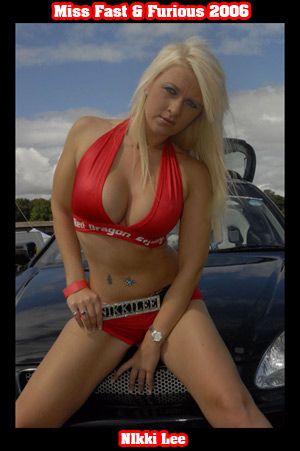 Born & raised in the East End of London, Canning Town to be precise NikkiLee has never been able to shift her cockney twang, and she wouldn’t want to either, it’s who she is.

Raised partly by her nan, NikkiLee soon learned she was never going to be a normal child, her nan often saying *theres something different about you*, no truer word to be ever said.

From a young age she’s always been loud and outgoing, to which she blames her dad for, but  in certain situations she can be quite shy which stems from her mum.

When you hear the name NikkiLee a few things come to mind: blonde, mouthy, and busty!

NikkiLee started modelling in 2005 where she entered a Max Power modelling competition at Birmingham’s NEC, she went on to became one of the most known car show girls to date, always drawing a crowd for what ever company she is the face of, and still does to this day.

NikkiLee went on to win many competitions including, Miss Fast and Furious, Miss Promo, Fast Car magazines Wannabe competition, where she stormed the votes, 80%, her rivals managed 10% each, then NikkiLee went on to win Breast Of Britain for Fast Car magazine which was based on crowd reaction, she hasn’t looked back since, magazine covers, touring the UK and Ireland with the magazine etc. Following Fast Car, other magazines wanted a piece of NikkiLee, including, Zoo, Modified Motors (cover) Nuts, Daily Mail, Daily Star, Slick magazine (front cover) Max Power, Daily Sport, FHM, Loaded, to name but a few.

NikkiLee has also touched base with many tv appearances, including Jordan & Jerry Springers Friday Night Project, Eastenders, Reggy Perrin, Silent Witness, Never Mind the buzzcocks, 5th gear and many more. Radio presenting has also been a part of NikkiLee’s work, her fellow mate Tim Shaw often did stints of presenting with her on Absolute & Kerrang Radio, and more recently featuring on Radio 1 giving her opinion on the recent grid girl banning situation.

A film called Thugs, Mugs & Violence, saw NikkiLees lead acting role, where she plays a kidnapped sister of gangster Joe Pyle. Over the years NikkiLee has managed to accomplish many strings to her bow, and she wont stop until world domination is complete.

Other accomplishments to which NikkiLee has achieved was winning best presenter at the UKAFTA awards on November 20th 2008.

There is still so much that NikkiLee wishes to try & accomplish, and has already set the wheels in motion for her own you tube channel, where you will simply see the real cockney sparrow in action.